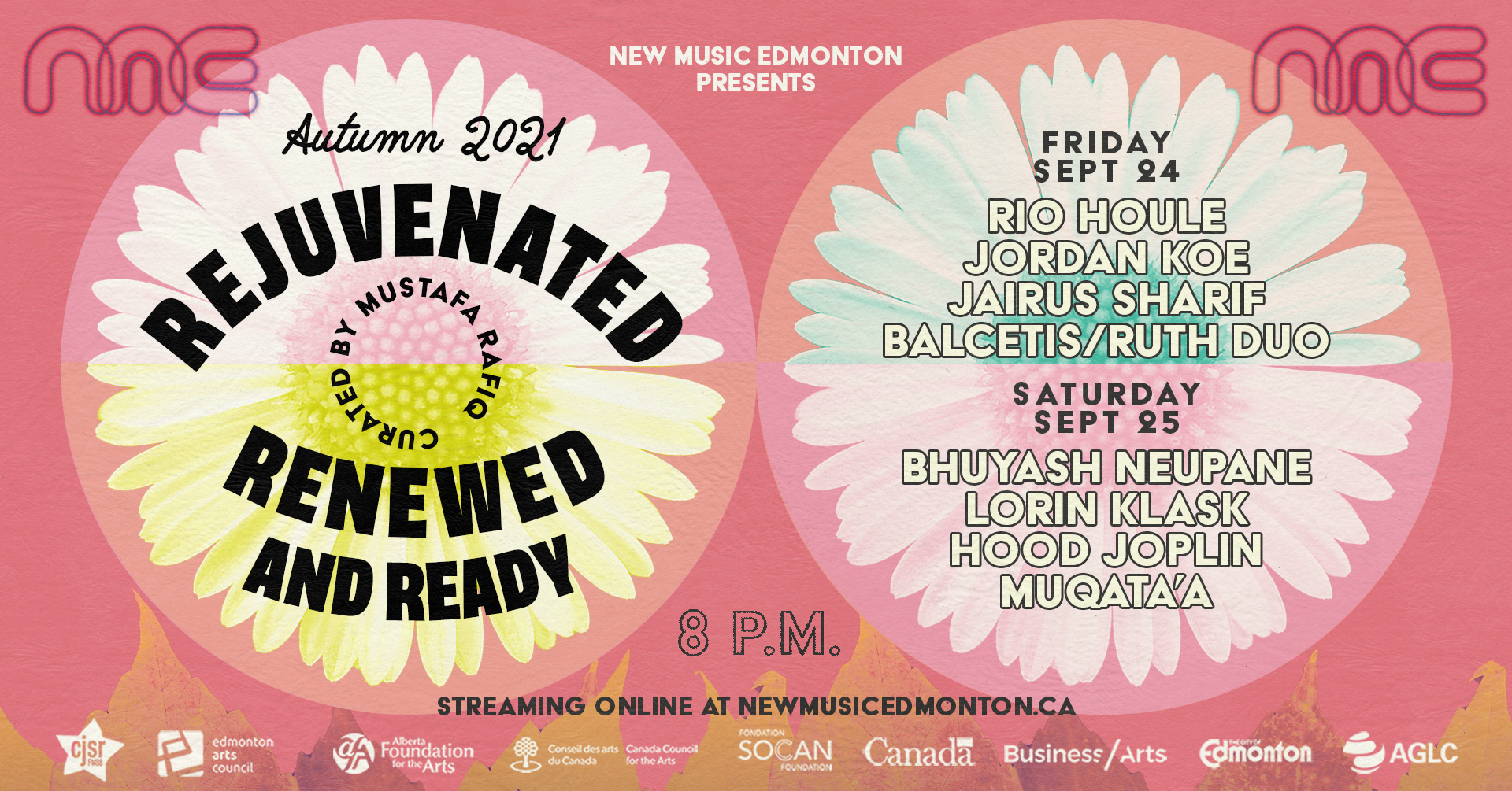 Autumn 2021 is now available on-demand on Vimeo! NME is thrilled to present the first events of our 2021-22 season with two nights of incredible streamed performances curated by Mustafa Rafiq. Join us at 8 PM September 24 and 25. All events are free but please consider donating the price of a ticket to help support our programming.

Artists (scroll down for more information about each event):

It is my distinct honour to share these new works through New Music Edmonton. My intention was to give space to these creatives who have inspired me over the years to create freely. artists from amiskwacîwâskahikan & mohkínstsis represent Alberta alongside special guests from Palestine and Nepal for this two-night presentation.

I see these artists pushing within their respective fields. It brings me a lot of strength in my day-to-day. in the times when I am not creating. This reflective state makes up most of my days lately. It feels difficult, I am grateful to bring folks together to create. It brings me peace in the times when I cannot draw upon strength to share what is inside. As I write this, listening to Muqata’a’s piece, I feel rejuvenated, renewed and ready. For whatever will come. I hope to share it with my community and friends.

I am fortunate to consider these people my contemporaries, I look forward to witnessing their growth and continuing to be inspired by their strides.

Mustafa Rafiq (b.1995) is a creative working in music, theatre, creative programming & artistic/creative education streams for children. Their practice explores the idea of unbinding throughout. Unbinding oneself from gender construct, racialized existentialism, and expectation. They are a prairie child at heart, the desire to run free in nature can be felt in their work.

Glow gently if you can; if you wouldn’t like to right now, that’s okay too. Just see what happens.

Dau 188 Pt. 4: Composed and recorded in my home on September 1 & 2 2021 as a means of attempting to experiment while exploring truth. Filmed at Lisa’s Island and Q4DB Music Room

Rio Houle is a nehiyaw artist based in Treaty 6 territory. He primarily works in sound, notation and text. Pieces are often created with the aim to see what happens using whatever is on hand, as well as to display the impact of the current moment. He finds inspiration in obscure memes, the outside world, mental health and things that have nothing to do with each other.

Jairus Sharif is a Treaty 7-Based multi-instrumentalist, producer, sound artist and improviser.

Internationally recognized as an ambitious contemporary saxophonist, Allison Balcetis has studied and collaborated with artists from around the world.  Her international performance career includes concerts throughout North America, Europe, Brazil, Thailand, and Taiwan. Her work as a soloist and chamber musician has produced over 70 world premieres.

Allison’s current chamber ensemble include performing with mixed instrument quartet UltraViolet, the Edmonton Saxophone Quartet, Proteus Quartet, free improvisation ensemble damn magpies, and work with modern dancers in Edmonton.  She is a major proponent of playing the music of our time, music by living composers, music that encompasses the sounds of our modern world.

As a faculty member of the University of Alberta since 2009, Allison trains the next generation of thoughtful, artistic musicians.  Outside of the university, she was also the co-curator of SubArctic Improv, a monthly concert series pairing over 150 dancers, musicians, text, and visual artists in a totally improvised context which ran from 2016-2018. In 2017 she was awarded the Qualico Artistic Leadership Award from the City of Edmonton.

Kelly Ruth is a Textile/New Media artist from Treaty 1. Winnipeg, currently living in Treaty 6, Edmonton. She has been activating her textiles and tools through using electronics, sound, and integrating microcontrollers into the foundations of her woven cloth. She has created several bodies of work using fibre, dyeing with plants, and weaving, recognizing these as early technologies, and a relationship that humans have had with the land. Most recently she has been researching and creating in the virtual world. In her work she is primarily concerned with the interplay between class, economics and ecology. In performance she uses contact microphones and effects pedals on her weaving loom and other fibre related tools. She performs solo and with an improvisational trio named Civvie. She has performed solo at the Vancouver New Music Festival, Handmade Assembly, Forthwith Festival and has exhibited a textile/sound installation as part of Send + Receive Festival, as well as participated in a residency at the Textile Arts Centre in Iceland and performed at KM28 in Berlin. Working with Civvie she has performed at Sounds Like Festival, Now Hear This Festival in a collaboration with Ethan Bokma and respectfulchild, Jazz Winnipeg Festival, and has opened for an improvisational collaboration between Venetian Snares and Daniel Lanois.

Expressions of an Inarticulate – Bhuyash Neupane

Expressions of an Inarticulate is a work for solo Tabla and Electronics. The Movement has processed nature sounds (winds, raindrops on ceiling, raindrops on the floor), horn of the steam engine, express Indian railways, fistful of coins falling on the floor and basic use of ambient synth and chord progressions. As with my personality, where, explaining what’s within me seems the most difficult thing to do which proves I am not perfect, but expressing my emotions through tabla seems super achievable. The piece is a sincere transcription of one’s emotion when not understood and taking refuge in music when an individual is bad with expression and lacks skillful use of words (in relationships or day to day communications). Hence, the solo is just an expression and doesn’t follow any boundaries and/or meter in its presentation.

For the listeners, this could be firsthand attempt at using Tabla solo in meditative setting. Urge the listeners to imbibe and absorb the contrast tones and seemingly bout and then the unity between the tabla (wooden treble drum) and the Dugga (metallic base drum) which played together is called TABLA. Lastly, the audio is for deep listening or maybe just for some ambient background use and will have to be studied and understood individually.

Routine Tempo is composed of binaural field recordings of Klask’s travels on foot, along with visuals of time lapse moon risers taken mostly of their  Boyle Street neighbourhood and adjacent North Saskatchewan River Valley. Arranged, layered and looped, Klask builds a soundscape that snapshots their aural interactions with their routine movements, exploring the space and tempo that both nature and urban environments create. Listen with headphones for the best effect.

Natural Response: I composed this piece in August / September 2021 just after the climax of summer hit; this piece takes us into the natural release that is autumn. A friend pulled a hexagram for Natural Response and came across as “2” which (literally) represents the transition into the colder months and how we naturally and gracefully shift to our pragmatic winter state. Although the song is designed for a solo listening experience, there are elements of club music influences.

Bhuyash Neupane is a multi-instrumentalist, singer, and rhythmic ensemble composer hailing from Nepal. As a performer of eastern classical music and a student of Nepalese folk music, his attempt has always been to have music lovers witness cross-pollination of pure traditional performance art with electronica and ambient music, which he believes will help in popularizing electro-folk experimentation.

Bhuyash has performed at numerous music venues in India, Nepal and abroad with various musical groups. He has worked with international musicians from different background and is thus student of different music styles too. Bhuyash has been involved in experimental music collaborations happening in the city of Edmonton, and around the province of Alberta and Saskatchewan.

Lorin Klask is an Artistic Producer, Critical Listener, and Percussionist, working in the fields of Sound and Space from their home in amiskwaciy, Treaty 6 and MNAR4 Territory, Edmonton, Canada, since 1994. Focused and inspired by the lands and peoples of their neighbourhood, Klask’s recent practice explores creating immersive environments, with hopes of relating experiences and stories that allows the audience to “step into another’s shoes”.

Hood Joplin is a producer, dj, and [sometimes] vocalist who makes heavy yet soulful juke and hip-hop hybrids, constantly pushing her realm of electronic music forward. Born in one of the most diverse neighbourhoods in Canada’s north, HJ’s culturally diverse background has given her a holistic interpretation of hip-hop and electronic music and has turned the grey space in between the genres into her own.

Joplin’s journey in music began as a young girl borrowing tapes from her older siblings that spanned the spectrum in music before she eventually discovered rap music and fell in deep. Before long, she spent a lot of time locked in her room, making beats that started out as sample-based boom-bap before giving way to glitchy loops and high-energy edits that would find their way online to a receptive audience.

In summer 2016, her debut EP #75FFA1 was independently released via Drama Hands, an Edmonton-based netlabel. Named after the HTML colour hex, the release opened the door for more profile mixes and shows with DJs like DJ Taye, Flying Lotus, Robert Hood and Chippy Nonstop. In 2017, Joplin would follow up with the incendiary debut album HAZARD, released via Owake Records.

In 2020, she teamed up with close collaborator Text Chunk to release the nine-track Bank Account (Moveltraxx), a collection of riotous tracks that refuse to let up upon first listen. The collaborative release picked up coverage from outlets like Hyponik and Complex, who named “Keepflowin’” as the unofficial anthem of the 2019 Dekmantel Festival where the song found a place in many DJ sets at the festival. Amid these projects, Hood Joplin has curated many DJ mixes for a variety of outlets including Thump, Purple Sneakers and Untitled #909, all the while contributing tracks to various compilations, served as a 2019 Red Bull Music Academy Bass Camp alumni and a Serato Sample Challenge finalist.

Mutaqa’a is an electronic musician and MC based in Ramallah, Palestine. Using sampled material, field recordings, and electronic devices, the results range between harsh beats, abstract tones, and glitch. He co-founded the Ramallah Underground Collective  [2002-2009] and is part of the sound and image performance group Tashweesh alongside artists Basel Abbas and Ruanne Abou-Rahme.