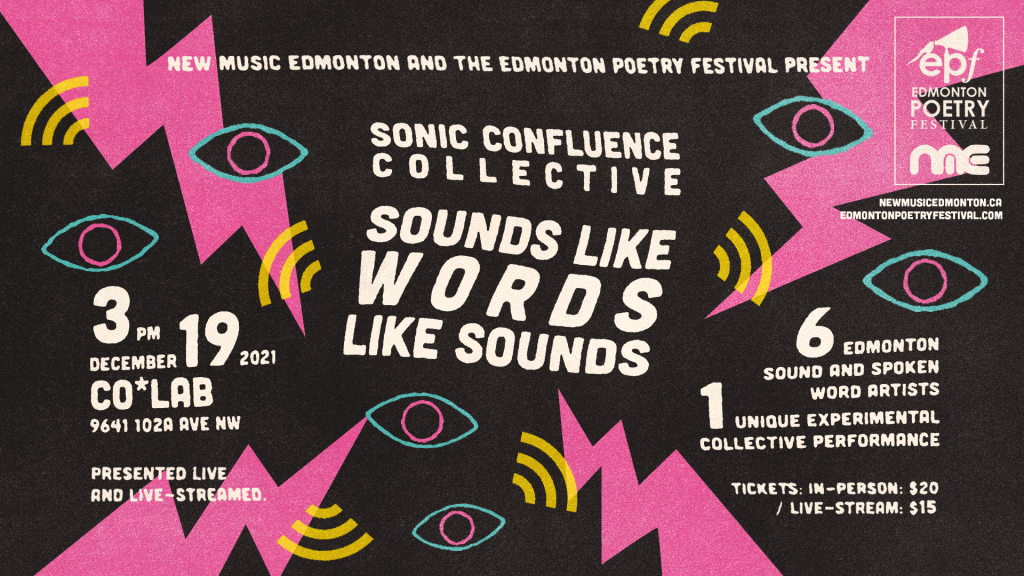 Join New Music Edmonton and the Edmonton Poetry Festival for Sonic Confluence Collective: Sounds Like Words Like Sounds on Sunday, December 19, 2021 at 3pm online or in person at Co*Lab (9641 102A Ave NW). Tickets are $15-$20 in advance, $25 at the door and can be purchased through Eventbrite. Proof of vaccination and masks will be required for in-person attendance.

Sonic Confluence Collective: Sounds Like Words Like Sounds brings together 3 artists each from the spoken word and sound worlds who have combined their talents to create a collective performance.

This is the first-ever collaborative project between the Edmonton Poetry Festival and New Music Edmonton. The collaboration highlights the magic of mixing or mashing genres to create a unique sonic experience.

The Edmonton Poetry Festival thanks Canadian Heritage Grant for funding support towards this project. New Music Edmonton thanks our funders: The Edmonton Arts Council, The Canada Council for the Arts, The Alberta Foundation for the Arts, SOCAN Foundation, The City of Edmonton, and AGLC.

Afarin Nazarijou started playing piano at five and expanded to Qanun (traditional Persian string instrument) which became her main instrument. She also started to play the Tombak (Persian percussion instrument) in Tehran Music School where she graduated with honors. She had the privilege to study Iranian Classical music repertoire and improvisation and studied Physics of Sound in University of Tehran during her bachelor’s and Master’s in performance.

With the aim of expanding her multicultural perspective of music, she decided to go abroad and was accepted at the New England Conservatory of Music in Boston with the highest scholarship offered by the school and won the Peter Row award of the year at NEC in 2021. In 2021 she started studying Masters of Arts at University of Alberta.

She is passionate for sharing her knowledge and passion of music with different cultures globally, playing Iranian Classical music, free improvisation, composing and arranging for mixed ensembles.

Biboye Onanuga  is a musician and educator based in YEG. Steeped in the local arts scene since high school, he has become an active member of the community and recently completed his music degree at MacEwan University. Biboye is a drummer-for-hire and leads the band, Good Information, while supporting and facilitating accessible music programming in Edmonton. Lately, you can catch Biboye cycling around town, shooting hoops, or running to see how far his legs can take him. (Bibo’s not big on winter)

Louis Bouchier is a composer/performer from Edmonton, Alberta. He currently holds a Bachelor of Arts, Music Major, Native Studies Minor from the University of Alberta. Throughout his career, Louis has freelanced with multiple bands and musicians. He has worked as an Electric Guitarist, Lap Steel Guitarist, Composer, Vocalist, drum programmer, and Electric Bassist. Louis has built his unique skillset in performance, technical and compositional skills.

In recent years Louis has played in Sweden with the Americana band Marystown, nationally with Alt-Country band The Uncas, and recently with Hip Hop sample-based group Sampler Café. Louis has also recorded as a session player with Edmonton Bands Brother Octopus and The Devil’s Sons. In 2017, Louis performed improvisational computer music for SubArtic Improv. In 2018, Louis opened for nine-time Grammy-nominated Nothern Cree with the group Sampler Café. In 2019, the group attended the 5 day Alberta Electronic Music Conference in Calgary.

Cay de Dios (they/them) is an Edmonton based Poet raised on fantastic tales, and heartbreaking stories. Entranced by the emotions, and connections those books displayed, they forge poems hoping to bring a little more compassion to the world. Their poems are vulnerable, hopeful, and a little curious with the intent to create spaces that allow folks to explore emotions with kindness.

Some-Sum also known as Grizzly Bear his paper name is Ryan James Summers and he is a spoken word poet, performance artist and writer from amiskwaciwâskahikan Edmonton Alberta Canada. His work covers anti-colonialism, indigenous spirituality, his own personal story and the relationship between self and the world around us.

Tzadeka (Maigan van der Giessen), is an Edmonton based emcee who has been pushing the boundaries of hip hop music since putting out her first album with hip hop collective Eshod ibn Wyza back in 2003.  Maigan’s spicy vocals and intricate rhymes blend with masterful beat-making to create a sound that is distinct and fresh; with hints of jazz, punk, poetry and politics.

Tzadeka (TZA-deka) has released five albums under the name and has taken part in numerous other collaborations that highlight her diversity, creativity and intellect Tzadeka makes music that is unpredictable, clever and magnetic.