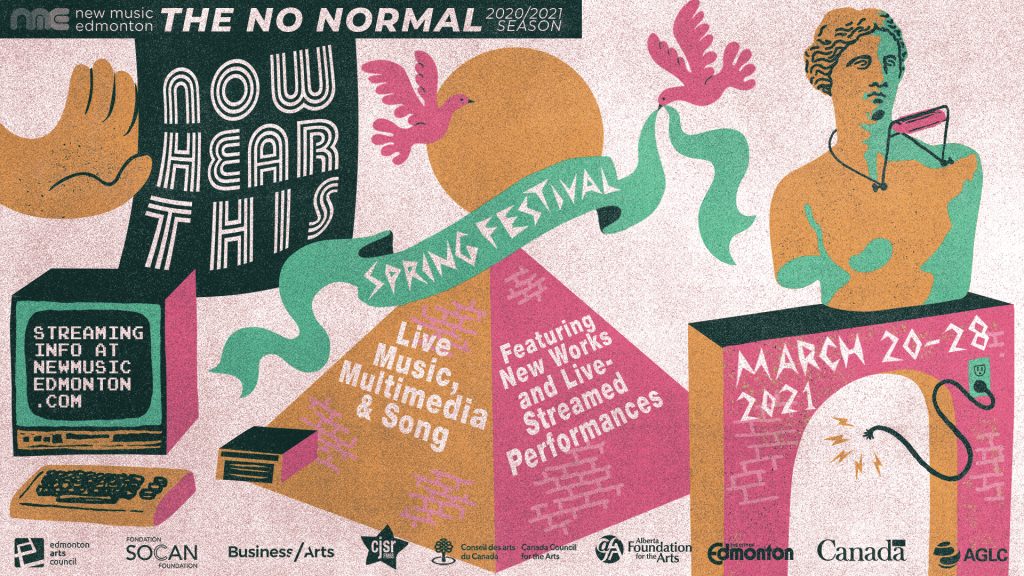 It’s that time of year — New Music Edmonton’s invites you to our tenth annual Now Hear This Festival, Spring Equinox edition! From March 20 – 28, explore an array of creative digital works, interviews, and live streams from new and beloved Canadian musicians, composers, and performers. Festival programming this year is offered free of charge to enhance accessibility and is made possible due to the support of our partners and funders as well as individual donations. If you have the means, please consider donating the price of a concert ticket or a festival pass to NME so that we can continue to support new music in Edmonton that is accessible to all.

Festival lineup (scroll down for program and artist info for each event):

Aatsista’mahkaa (Curtis Running Rabbit-Lefthand) is an Indigenous multimedia creative producer, musician, and music executive. He is the founder and Board Member of Indigenous Resilience in Music (IRIM) – an Indigenous-led organization empowering Indigenous youth and musicians in reclaiming their identity through music and the arts. As an artist and musician, he is a solo songwriter and accompanying writer in past and present hardcore punk groups in so called Canada. His work as a music executive continues to evolve as a current festival curator, director, and as an artist/group manager. Curtis is a proud member of the Blackfoot Confederacy and comes from the Amskaapipikuni, Siksika and Stoney Nakoda nations.

Katherine Paul is Black Belt Eagle Scout. Released in September of 2018, Mother of My Children was the debut album from Black Belt Eagle Scout, the recording project of Katherine Paul. Heralded as a favorite new musician of 2018 by the likes of NPR Music, Stereogum, and Paste, the album was also named as a “Best Rock Album of 2018” by Pitchfork, and garnered further end-of-year praise from FADER, Under The Radar and more.

Arriving just a year after that debut record, At the Party With My Brown Friends is a brand new full-length recording from Black Belt Eagle Scout. Where that first record was a snapshot of loss and landscape and of KP’s standing as a radical indigenous queer feminist, this new chapter finds its power in love, desire and friendship. The end result presents a captivating about-face that redefines KP’s beautifully singular artistic vision.

Matthew Cardinal is an amiskwaciy (Edmonton, Alberta) based musician, composer, and sound designer, known for his work with Polaris Short List nominee group nêhiyawak. Cardinal’s solo full-length album “Asterisms” was released in October 2020 on Arts & Crafts. Cardinal’s music moves from delicate, minimalist pieces to vast drones and sparkling, modular synthesizer beats. He has been performing music across the country for the last few years in various groups, as well as doing soundtrack work in film and sound for museum installations.

@djxenoyoga (2017 ongoing) performs live and also exists as automated performance systems. Derived from common techniques of DJ as a trope, @djxenoyoga samples and mixes textual, sonic, and visual internet readymades into cyborgian spells and entropic chants of discursive mashups. The audiovisual performances attempt to remediate/alienate the mis/disinformative realities of post-truth mediascape as a hacking ritual that works as and against ideological hypnosis. XENOYOGA(((TROLL THE SCROLL))) in part translates tweets of CNN breaking news into melodies and speech voices as samples, in part remixes and hinges on the first single XENOYOGA((I REALLY WANT SOME)).

Xuan Ye 叶轩 is a Chinese artist, musician and engineer, currently based in Tkaronto/Toronto as an uninvited guest.

rebecca bruton weaves new earth magic, with a solo set of electric guitar improvisations, and songs from the thin places.

rebecca bruton is a Calgary-based composer, song maker, vocalist, and bandleader of the rarely-heard experimental supergroup Swanherds.  She creates across several musical mediums, including chamber music, film scores, and free improvisation.  Rebecca’s chamber compositions are widely performed, having been commissioned by Ekmeles vocal ensemble, Quatuor Bozzini, Quasar Quatuor de saxophones, Arraymusic, and more.  She is one half of the vocal performance duo Moss Moss Not Moss, with Canadian-Icelandic poet Angela Rawlings.

During our project work in 2021 we continue to be inspired by the collaborative interplay of the symbiotic organisms known as lichens. Lichens fascinate us with their ability to adapt and thrive: they fashion ingenious partnerships so well balanced they become self-contained ecosystems, as photosynthesizing organisms generate sugars from atmospheric carbon dioxide and share the nutrients with fungal elements that give them structure and protection.

In March 2021 we stream from the Instant Places studio to New Music Edmonton’s Now Hear This Festival an audiovisual performance premiere titled flavopunKaventure in honour of Flavopunctelia flaventior, the Speckled Greenshield lichen common to the parklands of Alberta.

We build an audiovisual capture and encoding system inspired by lichen symbiosis, a networked environment that combines live action with altered reality visual interventions in a multicamera switching matrix. Motion detection, audio analysis, and algorithmic processes combine in the Compound Eye camera matrix to form a dynamic viewport into the performance, as malleable meshes based on digital drawings interpenetrate live action through luminancekeyed windows.

flavopunKaventure is a networked performance shaped into vignettes by timing envelopes coded in Max-MSP. Each vignette is a compressed audiovisual world composed of parallel live actions periodically altered by algorithmic processes.

We are presented side-by-side in a split screen visual space as our live inputs from voice, tuned oscillators, and the sonic drawing system feed microtonal harmonizers and merge in an immersive binaural audio space. The Compound Eye camera system brings the online visitor inside the performance, looking through skeins of dissolving wires to animated machines and tactile manipulations.

For online performances Instant Places are developing an audiovisual capture and encoding system that combines live action with altered reality visual interventions in a multi-camera switching matrix. Under the collaborative name Instant Places Laura Kavanaugh and Ian Birse use performances, generative installations, and telematic networks to create instant places of imagination and connection, using hardware/software systems they custom-build for each project. They have created artworks on location throughout Japan, Australia, the Americas, the United Kingdom and Europe.

Most recently they live-streamed a performance from the Österreichischer Rundfunk studio to the EBU Ars Acustica satellite broadcaster during a self-directed residency in Vienna, and were commissioned by Kunstradio to create an audio work on location they mastered at ORF in February 2020, performed in collaboration with improvising dancers Charlotte Zerbey and Alessandro Certini in Florence, and created a generative visual score for their streaming performance with the Glasgow Improvisers Orchestra during GIOFest XIII.